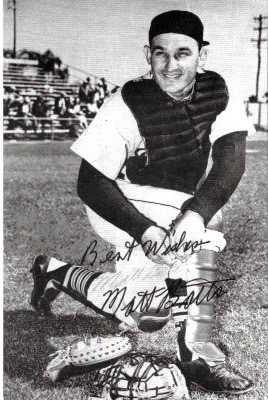 Going back into the archives for this one. Batts played 10 seasons for five different teams from 1947-1956. He spent his first four and a half seasons serving as a backup backstop in Boston. In 1953 he played 116 games for Detroit, which was the high-water mark for games played in his career.

Batts’ questionnaire is one of my favorites. A native of San Antonio, he notes this and points out that he played high school football against Austin High, which is actually a school I have covered during my days as a CenTex sports writer. These personal touches are what really make the correspondence special and as you can see, Batts does not disappoint.

Batts sent a few autographed photos back as well as the card I had sent him. One of them is pictured at the top of this post. Here’s the second one.

Batts spent a season with the St. Louis Browns and another with the Chicago White Sox. His final two years in the majors were with the Reds when he played just a handful of games in 1955-56. He spent one more season in the minor leagues (1957) before officially calling it quits.

Following his playing career, Batts relocated to Baton Rouge. He died at his home there in 2013.