I actually remember when I got this card. Picked it up at the 7-11 across Broadway Boulevard from our house on Cumberland Drive in Garland, Texas sometime in 1979. It was never worth enough money for me to lose it playing poker with my friends in high school and my mother is not the type of person to ever throw anything away. So, when I was looking for cards to send to players, I was happy to find it in a box that I had carried around with me for most of my adult life. It is an interesting journey the card has been on. From Garland, all around Texas to Oregon and California and then back to Texas. It eventually ended up in the hands of the man pictured on it and then it was returned to me in a different part of Texas.

But enough about me, let’s talk about Barry Bonnell because he is an interesting person. Bonnell played for three teams over a 10-year career that saw him come up with Atlanta in 1977 and stick around the big leagues until 1986 when his career concluded in Seattle. He played more than 100 games in seven of his 10 MLB seasons and finished with a lifetime average of .272. He hit more than 10 home runs in a season three different times and he stole more than 10 bases in a season three times. Twice he drove in more than 50 runs and two times he scored more than 50 runs.

According to his Wikipedia page, Bonnell’s career was cut short by “valley fever” which he contracted during spring training in 1984. This would certainly explain the dramatic drop off in games played as he appeared in 110 for the Mariners in 1984, then just 65 over parts of the next two seasons. Following his playing career he became an airplane pilot and then eventually an author. As noted on his survey, he wrote Enchanted Notions which is described as an ‘urban fantasy.’ It is available here. I told you he was interesting! 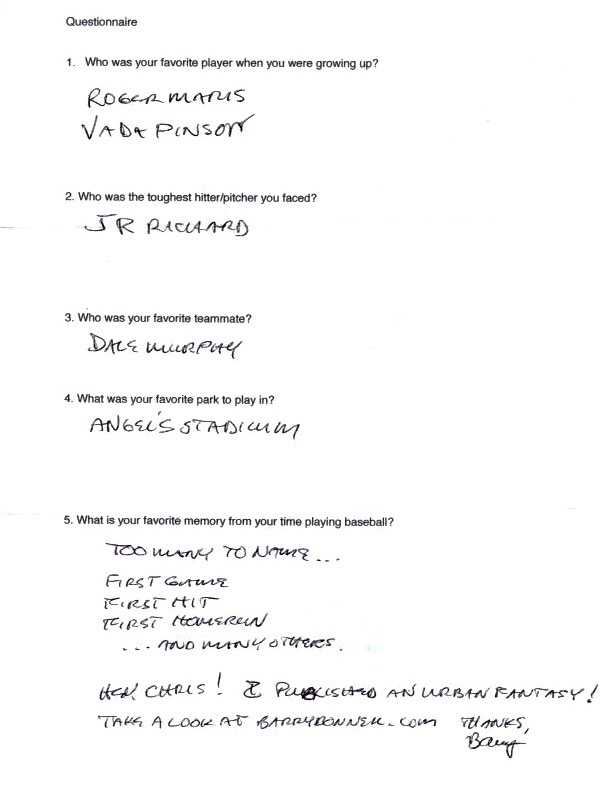 For more on Bonnell check out his site