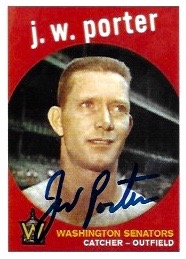 A career backup, Porter played for five different teams over the span of six seasons. He came up with the St. Louis Browns in 1952, playing in 33 games, but spent the next two seasons out of baseball and in the military. He returned in 1955 and played the next three seasons in Detroit. It was during this span that he had his best year which was 1957 when he played in 58 games and hit .250 for the Tigers. He made stops in Cleveland, Washington and St. Louis before hanging up his spikes in 1959. A notable presence in the clubhouse, Porter was chosen by Sports Illustrated as one of the “10 Greatest Characters in Detroit Tigers’ history” in 2006. Following his playing career, Porter was a minor league manager. He holds the distinction of being the youngest living former player for the Browns.

Porter’s survey is fantastic. Honestly, you could take his answers and easily write a feature on his career. That’s how in depth he goes in his answers. He also sent the extra card, pictured above, and actually wrote a note as well!