Perhaps better known as the Houston Astros color commentator or maybe even as their manager, Dierker had a solid major league career, winning 139 games, almost all for Houston, from 1964-1977. Dierker came up as a 17-year old with the Colt .45’s in 1964. He only pitched in three games that season, but hung around and made the big club in 1965. Dierker spent the next 11 seasons as one of the Astros’ top starters. He won 20 games in 1969, with an impressive 2.33 ERA and 232 strike outs in 305.1 innings. Dierker earned a trip to the All-Star Game that year and also received MVP votes at season’s end. He was an all star again in 1971. Dierker won 10 or more games nine times in his career. He pitched his last season for the St. Louis Cardinals in 1977. Just two years after retiring, Dierker ended up in the Astros’ broadcast booth where he remained until 1996 when he became Houston’s manager. He skippered the Astros to a 435-348 record and was named National League Manager of the Year in 1998. Four of his five teams won their division and reached the playoffs.  Dierker’s number 49 has been retired by the team.

Dierker’s no hitter came in the Astrodome against the Montreal Expos. Houston won the game 6-0 with Dierker striking out eight and walked four. Dierker has written two books about his time in the big leagues. While his website is no longer active, his books are available here. 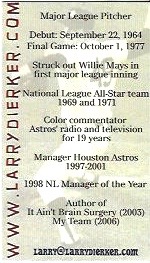