A World Series champion and four-time all star, Friend was one of the best pitchers in the National League during his 16-year big league career. Friend came up as a 20-year old with the Pirates in 1951 but did not find real success until 1955 when he went 14-9 for Pittsburgh. His 2.83 ERA that year was best in the senior circuit, earning him MVP votes for the season. He was an all-star in 1956 with 17 wins and he posted another 14-win season in 1957. The next year might have been his best. Friend won 22 games in 1958 with a 3.68 ERA. He led the league in wins and games started that year. In addition to going to the All-Star Game, he finished third in Cy Young Award voting and was sixth in the MVP vote. 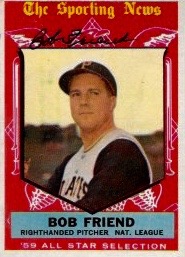 After a down year in 1959, Friend won 18 games for the National League pennant-winning Pirates in 1960. His performance garnered him another all-star selection and helped Pittsburgh reach the World Series where they defeated the New York Yankees in seven games. For his part, Friend pitched in three World Series games, including two starts. He had an 0-2 record in the series.

In 1966 Friend’s 15-year tenure with Pittsburgh ended and he joined the Yankees where he pitched for half the year before being traded to the New York Mets for the remainder of that season. He retired following that year. Friend finished with 197 career wins against 230 losses. Despite double-digit wins in nine of his big league seasons, Friend had more losses than wins because the Pirates’ teams he pitched for were typically lower division squads. So it is not surprising that he was the first pitcher to lead the league in ERA while pitching for a last place team.

Obviously I have a lot of signed cards from Mr. Friend. I think this is due to a previous issue with my record keeping and the fact he was prominently featured in Topps’ 1959 set which I once owned in its entirety. This card, however, is my favorite because it features the signatures of Friend, Vern Law and Roy Face. Unfortunately Ron Kline died in 2002, before I ever even had this particular card.