A key piece of three World Series winning teams, Kuzava pitched for 10 years in the major leagues, most notably for the New York Yankees from 1951-1954. Kuzava first broke into the big leagues in 1946 with the Cleveland Indians. He pitched in just six games for the Tribe over the next two years before spending all of 1948 in the minor leagues. He reappeared in the majors with the Chicago White Sox in 1949, winning 10 games and finishing fourth in the American League Rookie of the Year vote. Kuzava’s best year as a starter came in 1951 when he went 11-7 for Washington and the Yankees. His 3.61 ERA was his best in any season where he started the majority of the games he pitched in. However, Kuzava made his mark in relief for the Yankees that year in the World Series, saving the deciding game to give New York the championship. He repeated the feat again in 1952 as the Yankees defeated the Dodgers in seven games. Kuzava left the Yankees midway through the 1954 season, going to Baltimore. He pitched for three more teams over the next four seasons, but his best days were behind him and his final big league appearances came when he pitched three games for the St. Louis Cardinals in 1957. Kuzava kept pitching in the minor leagues for three more years after that but was out of baseball following the 1960 season. 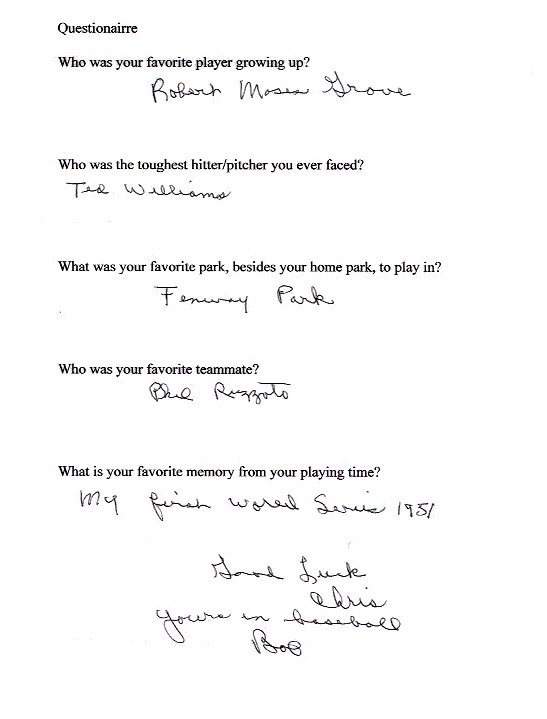 Kuzava is another guy with two questionnaires. They were filled out close to 10 years apart. 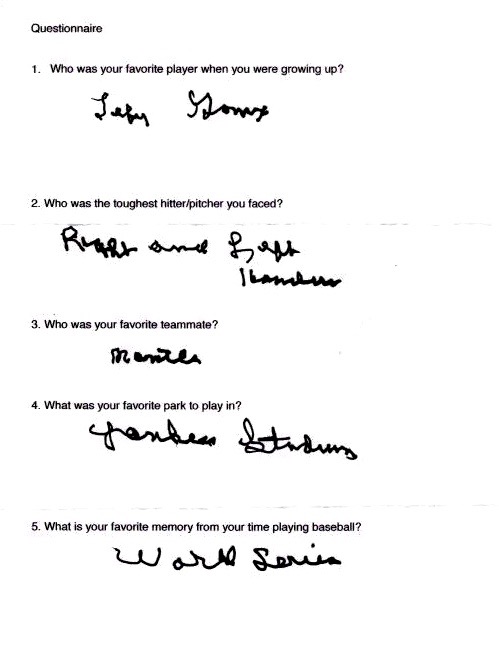 A couple interesting things. His favorite player changed from Lefty Grove to Lefty Gomez and he became a lot less specific (and humorous) about which hitters gave him trouble. Kuzava served in the military police during World War II. Because of this he was nicknamed ‘Sarge’ during his playing days. His career record was 49-44 with a 4.05 ERA and 13 total saves.

One thought on “Bob Kuzava”