Don Lee spent nine seasons pitching in the big leagues for five different franchises. He came up with the Detroit Tigers in 1957, pitching in 11 games that season. He appeared in one game for the Tigers in 1958 before spending all of 1959 in the minors. Lee was dealt to the Washington Senators in 1960. He started 20 games for them that year, winning eight. He had his best year in 1962, winning 11 games with a 3.46 ERA for the Minnesota Twins and Los Angeles Angels. Lee left the Angels to join the Astros in 1965 and was traded to the Chicago Cubs in 1966. He pitched in the minor leagues in 1967 and retired following that season. Lee finished with a career mark of 40-44 and a 3.61 ERA. 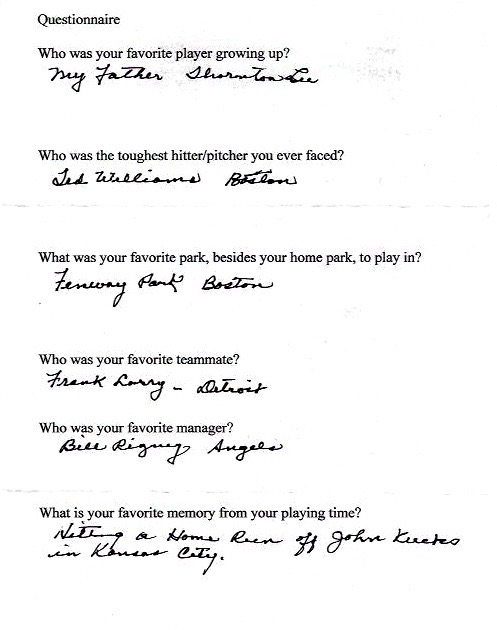 As he notes in his survey, Lee’s favorite player was his father, Thornton Lee, a 16-year MLB veteran who pitched for three teams from 1933-1948. Thornton won 117 games in his career, earning a trip to the All-Star Game in 1941, the same year he led the American League in ERA. An interesting bit of trivia, Ted Williams hit a home run off Don Lee in 1960 and off of his father Thornton in 1939, making Williams the only player in baseball history to hit a home run off of a father and a son.