The namesake of Fenway Park’s Pesky Pole, Johnny Pesky was an all-star shortstop for the Boston Red Sox for eight seasons and a fixture at Fenway Park for almost 40 years after his playing career ended. Pesky came up with the Red Sox in 1942 and immediately made his mark, hitting .331 as a rookie and leading the American League in hits with 205. He finished third in the MVP vote that year. Pesky spent the next three seasons in the Navy but returned with a bang in 1946. He was an all-star selection that year as he hit .335, again leading the league with 208 hits. He finished fourth in the MVP vote that season. Pesky led the league in hits (207) again the following season but his production began to drop in 1948. By 1952, Pesky was traded to the Detroit Tigers where he spent two seasons before finishing his big-league career with 49 games for the Washington Senators in 1954. 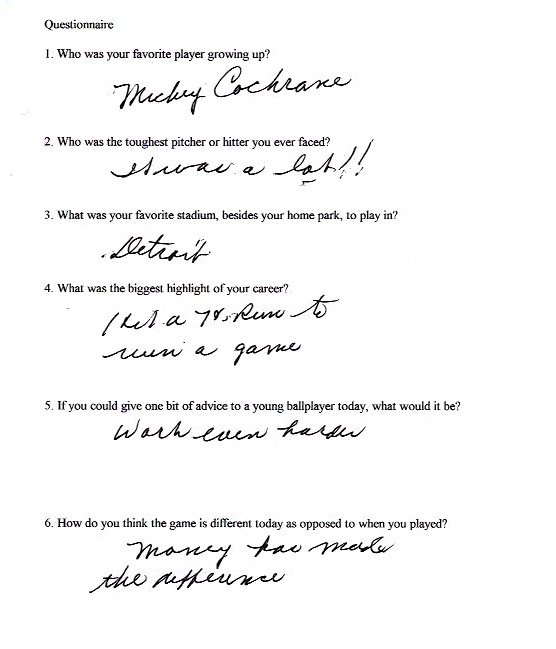 Pesky’s career mark was .307. He hit just 17 home runs which I guess is why his home run to win a game was so memorable. I could not find exactly when this happened. The old story of him hitting a home run that wrapped around Pesky’s Pole to win a game started by Mel Parnell has been proven to be wrong. So it must have been one of his other 16 home runs to which he was referring. Following his playing career, Pesky served as manager for the Red Sox from 1963-1964. He also coached for the New York Yankees and Pittsburgh Pirates. In 1969 he was the color man on Red Sox broadcasts and took a job coaching with the team in 1975. He held this position, or the job of special instructor or assistant to the general manager, from that time until his death on August 13, 2012. He is a member of the Red Sox Hall of Fame and his number has been retired by the team, making him the only former Red Sox to have such an honor without first being elected to the MLB Hall of Fame.