The man who hit “The Shot Heard Round the World,” Thomson had a fine major league career that stretched from 1946-1960. A three-time all star, Thomson hit 264 home runs and drove in over one thousand runs during his career. He came up with the New York Giants in 1946 and was the team’s starting center fielder the following year, hitting 29 home runs along the way. He made his first all-star team the next season and was an all star again in 1949 when he posted a .309 average to go along with 27 home runs and 109 RBIs. Thomson finished eighth in the MVP vote in 1951 as he hit .293 with 32 home runs and 101 RBIs. He earned his last All-Star Game trip in 1952 as he once again drove in more than 100 runs and led the National League in triples with 14. 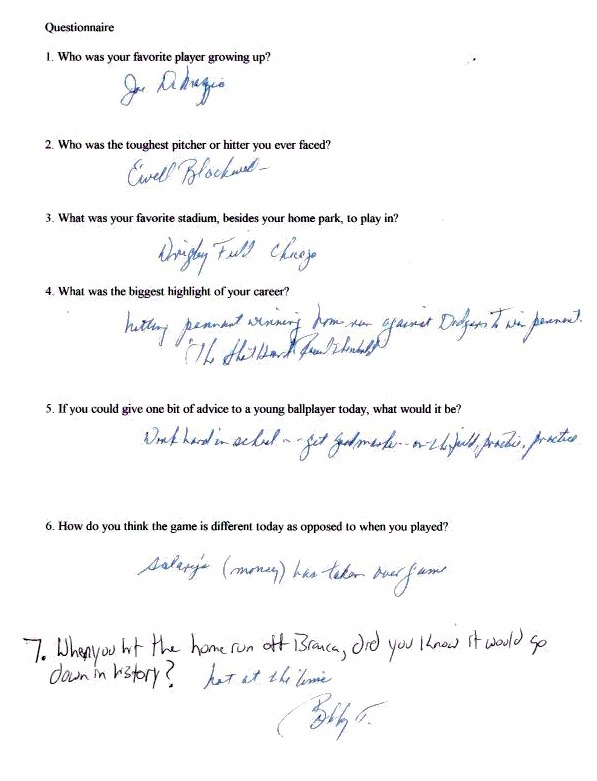 Thomson is most famous for his home run to beat the Brooklyn Dodgers, which clinched a three-game playoff series and the pennant for the Giants in 1951. Most people, whether they are baseball fans or not, are familiar with the phrase “the Giants win the pennant” and they have Thomson, as well as broadcaster Russ Hodges, to thank for that. Thomson and the Giants went on to lose the World Series to the New York Yankees in six games.

The moment was certainly the zenith of Thomson’s career as not only was it his most famous accomplishment, but it also happened during his most productive seasons in the big leagues. He had another strong year for the Giants in 1953 but was sent to the Milwaukee Braves the following season and his production dropped. He had a bounce-back year for the Chicago Cubs in 1958, hitting .283 with 21 home runs, but that was the last big year of his career. Thomson made stops with the Boston Red Sox and Baltimore Orioles before retiring in 1960.