An all star in 1968, Reed went 146-140 during 19 years spent pitching in the major leagues. Reed broke into the majors with the Atlanta Braves in 1966 and earned his lone trip to the All-Star Game two years later. He had his best season as a starting pitcher for the Braves in 1969. He was 18-10 that year with a 3.47 ERA, striking out a career-high 160 batters. Reed remained a mainstay in Atlanta’s rotation until 1975 when he was dealt to the St. Louis Cardinals. His time in the Arch City was short however, as he joined the Philadelphia Phillies the next year, shifting into the next phase of his career as a bullpen arm, in the process. Reed posted double-digit saves for the Phillies the next three seasons and then won 13 games out of the pen in 1979. He was 7-5 with nine saves for the 1980 Phillies’ team that won the World Series. He pitched three more years after that for Philadelphia before concluding his career with the Chicago White Sox in 1984. 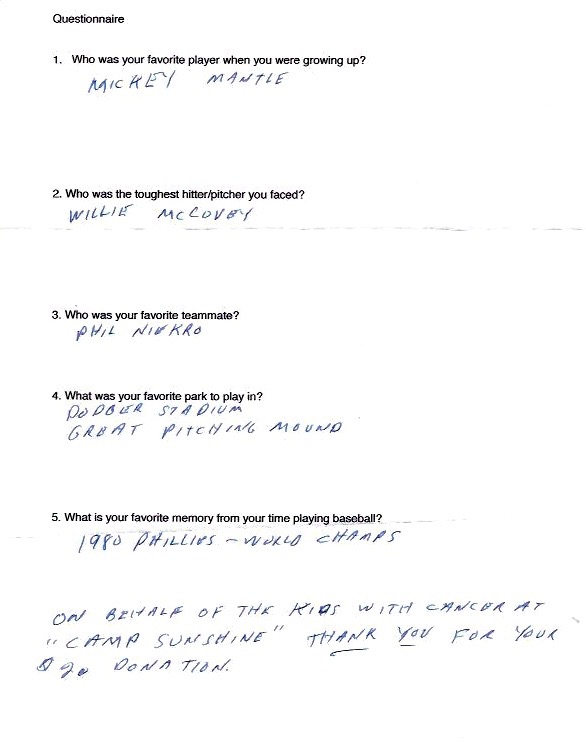 Reed had considerable experience pitching in the postseason. He appeared in 22 postseason games and pitched for the Phillies in the World Series twice. In five series games he had a 1.69 ERA and a save.

Reed is one of only 15 pitchers to win 100 games and save 100 games in their career. For a complete list of the 15 pitchers, go here. For what it’s worth, the last name on the list, Firpo Marberry, only shows 99 saves when you click on his career stats, so perhaps there are only 14.

Reed is also notable for the fact that he also played in the NBA. He was a three-year letterman at Notre Dame and then was drafted by the Detroit Pistons in the 1965 NBA Draft. He appeared in 119 games for Detroit from 1965-1967, averaging 8 points and six rebounds per game.

As Reed notes, he solicits donations for Camp Sunshine in exchange for his autograph. We happily obliged him as we do with most donation requests we receive. While we pay these costs out of our own pocket, we are always grateful for any financial assistance we can get to help offset the costs of these donations as well as stamps and other mailing supplies. If you would like to help out, check out our donation information here.