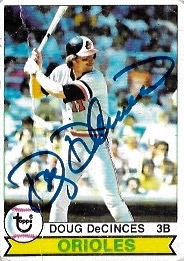 DeCinces blasted 237 home runs during a 15-year career that began in 1973 and concluded in 1987. He had a taste of the big leagues in 1973 when he broke in with the Baltimore Orioles. He continued to shuffle between the minors and the majors for the next two seasons but became the Orioles everyday third baseman in 1976. He remained in that spot for the next six years before being traded to the California Angels in 1982. DeCinces enjoyed his best years at the plate in Anaheim. He hit .301 with 30 home runs, 97 RBIs and 94 runs scored during his first season with the Halos. In what would go down as the best season of his career, DeCinces finished third in the American League MVP vote and won the Silver Slugger Award. He was an all star the following year and finished 11th in the MVP vote in 1986. 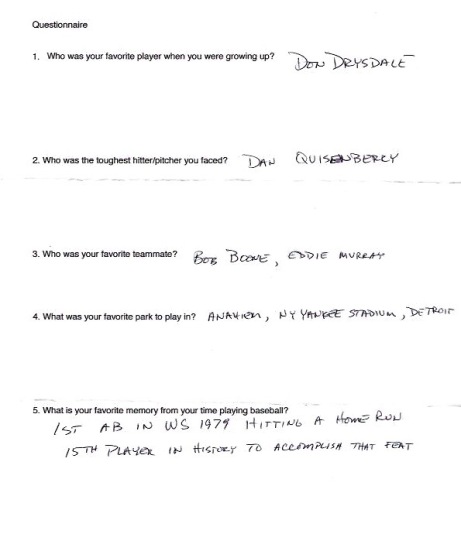 DeCinces left California in 1987 when he was traded to the St. Louis Cardinals. He played in just four games for the Cardinals to conclude his big-league run. As he mentions on his questionnaire, he was a member of the 1979 Baltimore team that faced the Pittsburgh Pirates in the World Series. In his first at bat of the series, DeCinces took Pirates’ starter Bruce Kison deep for a two-run home run. He is a member of the Baltimore Orioles Hall of Fame.