An all star in 1952, Yost spent 18 years playing third base in the major leagues, mostly for the Washington Senators. Yost’s first appearance in the big leagues came in 1944 when he played in seven games for Washington at the age of 17. He spent 1945 in the navy but returned to the Senators in 1946. He became the team’s starting third baseman in 1947 and remained in that spot through the end of the 1958 season. During this span, Yost led the American League in games played three times, in doubles once and in walks four times. He received votes for MVP during the 1950, 1951 and 1953 seasons. Washington traded him to the Detroit Tigers in 1959 and he responded by having a great season for Detroit. Yost hit .278 with a league-high 115 runs scored that year for the Tigers. In addition, he drew a league-high 135 walks which led to his league-best .435 on base percentage. Yost also hit a career-high 21 home runs that season, easily making it the best year of his career. He remained in Detroit for one more year before joining the Los Angeles Angels in 1961. He played part time for the Angels over the next two seasons before retiring in 1962. 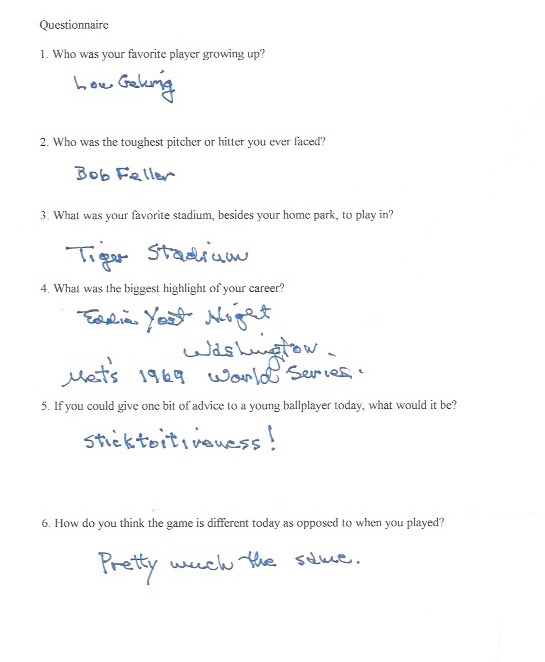 Yost ranks 11th on the career bases on balls list.

Following his playing career he took a job coaching third base for the Senators. He remained a big-league coach for the next 23 years, working for Washington, the New York Mets and the Boston Red Sox. As he noted on his survey, he was a coach for the Mets during their run to the 1969 World Series.