Garber saved 218 games during 19 years pitching in the majors. He came up with the Pittsburgh Pirates in 1969 and bounced between Pittsburgh and the minor leagues for the next four years. Pittsburgh sent him to the Kansas City Royals in 1973. He made eight of his nine career starts that season for Kansas City, finishing the year with a 9-9 record and 11 saves. The Royals dealt him to the Philadelphia Phillies midway through the following season and he soon became a mainstay in Philadelphia’s bullpen. In 1975 Garber led the National League in games pitched (71) and games finished (47) as he won 10 games and saved 14 for the Phillies. Philadelphia traded him to the Atlanta Braves in 1978 and he served as the Braves’ closer for the next 10 seasons. He had his lone 30-save season in 1982 for Atlanta in a year that saw him finish seventh in the NL Cy Young vote. The Braves eventually sent Garber back to the Royals which is where he concluded his career in 1988. 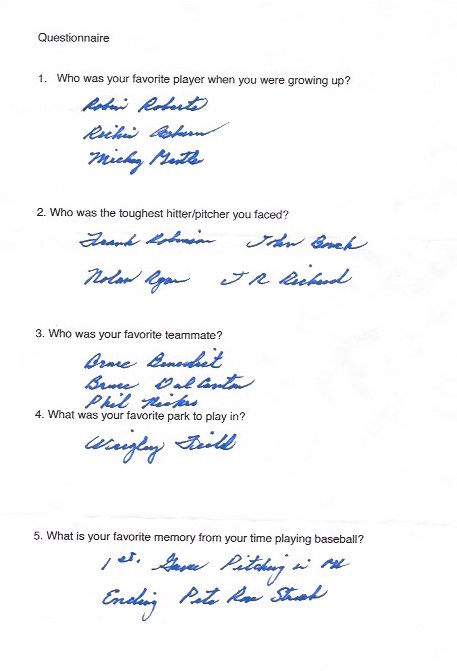 On August 1, 1978, Garber struck out Pete Rose, ending his 44-game hit streak. He is third on the Braves’ all-time save list with 141, trailing John Smoltz and Craig Kimbrel. Garber mentions J.R. Richard on his questionnaire as one of the toughest pitchers he faced. We featured Richard in March.