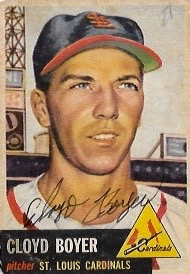 Boyer is one of the 100-oldest-living baseball players.