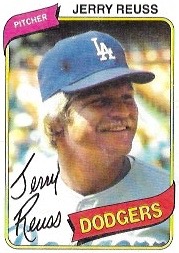 A two-time all star, Reuss won 220 games during 22 seasons pitching in the big leagues. From 1969-1990, he pitched for eight different teams and the Pittsburgh Pirates twice. He came up with the Cardinals and was a 14-game winner for them in 1971. After spending two years with the Houston Astros, Reuss joined the Pirates. He was an all star in 1975 when he won 18 games and had a 2.54 ERA. He left the Pirates and joined the Los Angeles Dodgers in 1979. After a rough first season in Los Angeles, Reuss posted another 18-win season in 1980. He finished with a 2.51 ERA that year and led the National League in shutouts (6) to make his second all-star game appearance. Reuss finished second in the Cy Young vote that year. He posted double-digit wins for Los Angeles in four of the next five seasons. He pitched for the Dodgers, Cincinnati Reds and California Angels in 1987. He was a 13-game winner for the Chicago White Sox in 1988 before finishing his career with the Milwaukee Brewers and finally the Pirates.

Reuss emailed his answers to the questions. Here they are:

Who was your favorite player when you were growing up?
1. Stan Musial
Who was the toughest hitter/pitcher you faced?
2. They were all tough. There were HOF players who did well against me and some that didn’t. There were hitters of less-renown who hit me well and many who didn’t. They’re all listed here. https://www.retrosheet.org/boxesetc/R/MU1_reusj001.htm
Who was your favorite teammate?
3. Too many to mention. Torre, Stargell and Garvey head the list.
What was your favorite park to play in?
4. Dodger Stadium and Comiskey Park.
What was your favorite memory from your time playing baseball?
5. 1981 World Series
Hope this helps.
Jerry
Reuss made two starts for the Dodgers in the 1981 World Series, winning Game 5 and losing Game 1. Los Angeles defeated the New York Yankees in six games that year.
We featured one of his favorite teammates, Steve Garvey, in June of last year.
Reuss has published an autobiography called Bring In The Right-Hander! It is available on his web site, jerryreuss.com.
Jerry Reuss – career stats