An all star in 1976, Steve Swisher spent nine seasons in the big leagues, playing for the Chicago Cubs. St. Louis Cardinals and San Diego Padres. He hit just .236 in his all-star year, but was still the Cubs’ representative for the Midsummer Classic. For his career, Swisher was a .216 hitter with 20 home runs. 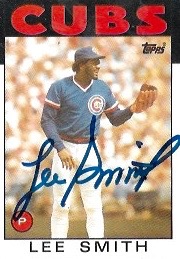 A seven-time all star, Lee Smith retired as baseball’s career save leader. His 18-year career saw him play for eight different teams and lead the league in saves on four different occasions. He won the Rolaids Relief award three times (1991, 1992, 1994). When he retired in 1997, Smith had saved 478 games and won another 71. He was inducted into the Hall of Fame in 2019.

Letters sent to Tony Scott, Bucky Dent, Rich Dauer, Elliott Maddox and Jim Merritt were returned with bad addresses. Neal Heaton asked for $5 and did not fill out the survey. Jim Maloney declined the chance to participate.