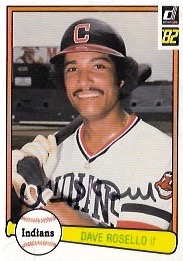 Dave Rosello spent nine years playing big-league baseball. He broke in with the Chicago Cubs in 1972 and finished with the Cleveland Indians in 1981. In 422 games, Rosello hit .236 with 10 home runs.

Tom Niedenfuer saved 97 games for four different teams while pitching from 1981-1990. Niedenfuer’s best years came while working for the Los Angeles Dodgers in the early 80’s. He posted 19 saves and seven wins for Los Angeles in 1985, helping the team reach the NLCS. Niedenfuer pitched in two games of the 1981 World Series for the Dodgers. He did not allow a run in five innings, but did not record a decision. Los Angeles defeated the New York Yankees in six games to win the series.

Our letter to Kevin Gross was returned with a bad address. Jerry Grote requested $10 for his signature.