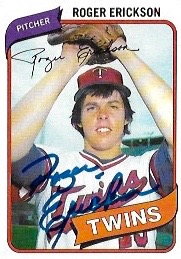 Roger Erickson won 35 games during a six-year run in the big leagues. From 1978-1983, he pitched for the Minnesota Twins and New York Yankees. His best season was his rookie year when he was 14-13 with a 3.96 ERA for Minnesota.

The 1978 National League MVP and a seven-time all star, Dave Parker was one of the preeminent sluggers of his generation, hitting 339 home runs over a 19-year career that spanned from 1973-1991. Parker was a key member of the 1979 Pittsburgh Pirates team that won the World Series. He got a second World Series ring as a member of the Oakland A’s in 1989. A fine fielder, Parker won three Gold Gloves as well.

Our letter to Joel Skinner was returned with a bad address.