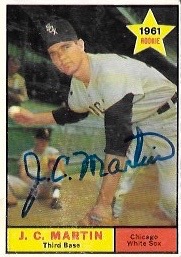 A member of the 1969 Miracle Mets, J.C. Martin spent 14 years catching in the big leagues, playing for the Chicago White Sox, New York Mets and Chicago Cubs from 1959-1972. In 908 games Martin hit .222 with 32 home runs. The best season of Martin’s career came in 1961 when he played in 110 games for the ChiSox and hit .230 while setting career highs in home runs (5), RBIs (32) and runs scored (26). Martin played in one game of the 1969 World Series against the Baltimore Orioles. He pinch hit in Game 4 and had a sacrifice in his lone plate appearance. The Mets won the series in five games. 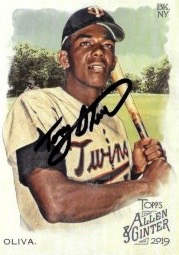 An eight-time all star and the 1964 American League Rookie of the Year, Tony Oliva slugged 220 home runs during a 15-year career spent playing for the Minnesota Twins. Oliva had a fantastic rookie campaign for Minnesota, leading the league in runs (109), hits (217), doubles (43) and batting average (.323) to earn his first all-star trip as well as top rookie honors. Oliva remained an All-Star Game fixture for the next seven seasons. He won two more batting titles during that time and finished with a career average of .304. Oliva and the Twins reached the World Series in 1965, but they lost to the Los Angeles Dodgers in seven games.

Pete Falcone won 70 games during a 10-year big league run. He won 12 games in each of his first two seasons, spent pitching for the St. Louis Cardinals, but never topped double digits again in his career. He joined the New York Mets in 1979, then pitched for the Atlanta Braves in 1983 and 1984 before retiring.

Nate Colbert returned our letter but did not answer the questions.