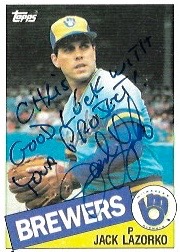 Jack Lazorko pitched in 69 games for the Milwaukee Brewers, Seattle Mariners, Detroit Tigers and California Angels from 1984-1988. He had his most productive season in 1987 while playing for the Angels. He won five games that year, while pitching in 117-and-2/3 innings. The five wins were the only wins Lazorko would get in his career. He finished with a 5-8 mark and a 4.22 ERA. 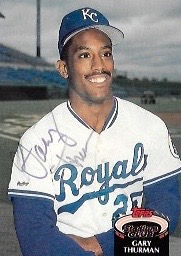 Gary Thurman spent parts of nine seasons playing in the majors for the Kansas City Royals, Detroit Tigers, Seattle Mariners and New York Mets. In 424 games he hit .243 with 65 stolen bases and two home runs. His best year came for the Royals in 1991 when he hit .277 with both his home runs and 15 stolen bases.

Our letter to Joe Altobelli came back with a note from his son letting us know his father is too sick to participate.